Bank researcher, Hinh Dinh, on what economic history teaches us

March 28, 2014—Although developing countries face enormous challenges in their fight against poverty, the only way they can become advanced economies is by having their workers get into manufacturing.

“Economic history has shown us that with very few exceptions, developing countries cannot advance without first getting into low-end manufacturing. It’s inevitable in the beginning,” says Hinh Dinh, lead economist in DEC’s Operations and Strategy Unit.

Workers in low-skilled services, such as street-side vendors and restaurant employees, have few opportunities, are less productive, and have incomes that fluctuate from one day to the next. Those in resource-based industries like mining have few opportunities because these sectors create very few jobs.

A factory job, on the other hand, provides for a regular income unaffected by seasonality, and cultivates a work ethic, while providing an opportunity to learn a trade.

But the type of manufacturing matters, says Dinh. As opposed to heavy industries, low-income countries need to produce the humble goods we use every day in and around the house, such as processed foods and beverages, leather, wood and metal products, and apparel.

Such “light” manufacturing requires a large pool of unskilled or low-skilled labor (in the millions), which developing countries have in abundance, along with low capital costs. It also requires well-known and readily available technology.

As an economy develops, it graduates from product assembly in the early stages to higher value-added products, manufacturing a higher quality and wider variety of goods. In the process, it becomes more and more industrialized. In the early 20th century, for example, Japan produced textiles and garments but now produces a large variety of goods that are of high quality. As a result, its workers now command higher wages.

“History has proven over and over again that only this approach works,” says Dinh.

Does this mean then, that workers in today’s low-income countries, most of whom are in Africa, are destined to be stuck in low-value manufacturing? Even worse, will they work their entire lives in sweatshops?

Dinh points out that over time, the period within which countries move up from low-income to higher income has become shorter and shorter. It took almost 100 years for Europe and the US to become advanced economies. Japan took about 60 years; Korea and Taiwan took about 40 years each. With globalization and the arrival of technologies like the Internet, African countries could become advanced economies in under 30 years.

Although taking issue with the term “sweatshop,” Dinh concedes that for the short-term, factory work remains the answer.

“But to me,” he adds, “this is a very dignified way to earn a living, compared to the alternatives of working in the field or on the streets. Even though there are downside risks, like monotony, safety concerns, and potentially poor living conditions, people flock to these jobs, so this shows a clear preference on their part.”

People feel like they have better prospects for the long run in this type of manufacturing than if they were working somewhere else.

“Countries can’t escape it,” says, Dinh, “so, we should now figure out the best way to do this.”

Vietnam and Ethiopia are currently undergoing a boom in producing these kinds of goods. Though the two countries are similar in size and population—Vietnam is further ahead, and so points a way for Ethiopia.

In 2009, whereas Ethiopia had 8,000 workers employed in the leather industry, and produced $8 million in exports, Vietnam employed 600,000 people, and had exports worth $3.5 billion (which has now grown to $10 billion). Ethiopia could do the same.

When countries try to bypass this stage, their workers miss being imbued with a key work ethic, and do not learn skills required for higher-end manufacturing. Countries which have tried to become advanced economies without getting into manufacturing, specializing instead in areas like agriculture or commodities, are likely to be stuck in the so-called “middle income trap.”

For those who know their economic history, this focus on manufacturing has more than a whiff of “industrial policy.” Industrial policy is the process by which governments attempt to pick and support industries and players they believe to be “winners.” The result is often disastrous.

“From my point of view, success comes not from picking winners,” responds Dinh, “but rather backing winners.”

A large number of country studies (six books covering Ethiopia, Tanzania, Zambia, China, Vietnam and Africa as a whole) produced by Dinh, in collaboration with colleagues from across the Bank and client governments, demonstrate that close cooperation between government and the private sector is key to successful industrialization—but the cooperation must be of a particular kind. The private sector needs to first successfully identify sectors organically, and then government needs to back it up by removing the binding constraints where necessary.

One such constraint could be lack of electricity.

If a government wants to provide electricity, advises Dinh, it should do so first in the areas where a cluster of manufacturing firms has already sprouted, and then move on to less dense areas.

So, what are the implications for the Bank in terms of its advice to governments?

“Rather than tell countries to do everything, the Bank should help countries identify the binding constraints that need to be removed in specific, viable industries. This will unleash growth,” says Dinh.

“Everybody wants to have meaningful social outcomes,” adds Dinh, “but in the long run, countries need a tax base to pay for the upkeep of the social sectors. Therefore, countries shouldn’t wait until workers are educated before starting to create jobs.”

Dinh also adds that industrialization efforts must be accompanied by solid safety and environmental standards, because the long-term social and economic costs of a degrading work environment are significant. One only needs to look at the tragic fires in Bangladesh’s garment factories last year, which has resulted in foreign clothing companies moving away to other countries.

Trang Nguyen is a Senior Economist in Poverty Reduction and Economic Management, the World Bank.

Over the past 5 to 10 years, many East Asian countries, not just China, continued to reduce poverty despite an economic growth slowdown surrounding the 2008-2009 global financial crisis. The $1.25 a day poverty rate in developing East Asia and Pacific (EAP) declined from 17.1 percent in 2005 to 12.5 percent in 2010. Which factor played the biggest role in the further progress against poverty? A likely assumption would be increased labor income, given that social policies in EAP are far less generous than in regions like Latin America and Eastern Europe and Central Asia. 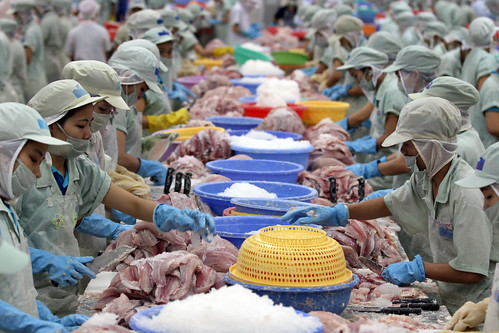 In an effort to better understand EAP’s poverty dynamics, we recently studied 6 countries (Cambodia, Mongolia, Philippines, Thailand, Timor-Leste, and Vietnam) using data from the mid-to late-2000s. Our findings suggest that access to work and better earnings are essential — results that echo those of another recent World Bank study, which looked at 16 countries of different regions (for EAP, only Thailand) where there had been a substantial drop in poverty over the past decade (for more details, see “Jobs Boost Poverty Reduction”).

Our study began by asking which factors played the greatest roles in each country’s battle against poverty. We found that: 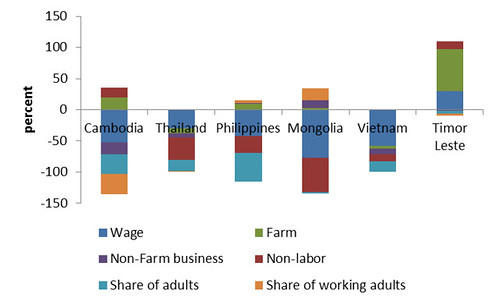 Which of these types of labor income helped or hindered the fight against poverty? The answer varies among the countries. In the 1980s and 1990s, work in agriculture was a key driver of poverty reduction. But more recently, wage income has played a bigger role. In fact, it explains roughly 50 percent of the observed decline in poverty in Vietnam, the Philippines, and Cambodia – and even more so in Mongolia.

At the same time, the loss of real farm incomes during this period set back efforts to reduce poverty in Cambodia, Mongolia, and the Philippines, although the wage income increases managed to more than offset those falls. Poor households in Cambodia and the Philippines experienced a reduction in the share of agriculture income in total income over the period 2006-2009. From 2007 to 2011 in Mongolia, agricultural production suffered substantial losses owing to severe weather conditions.

In sum, for EAP — as for other regions of the world — boosting access to work and better earnings is key to fighting poverty. Part of that process involves a movement from low-pay to better-pay employment and an increasing role of wage income relative to agricultural income

This entry was posted on Sunday, March 30th, 2014 at 9:10 pm and is filed under Bạn đọc viết. You can follow any responses to this entry through the RSS 2.0 feed. Both comments and pings are currently closed.